Men: Are You an Emotional Coward? Women: Do You Talk About Feelings Ad Nauseam? 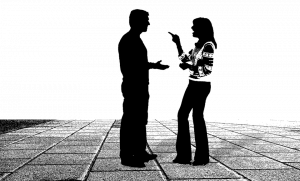 Insisting on having ANYTHING all our own way is baby stuff! Get mature and learn to compromise on the issue of expression of feelings.

We can find a middle ground so that men and women can enjoy each other more. Both sexes can get more out of relationships.

Most of us learn best from our experiences. So, it’s time for us to stop arguing about who is right—more expression of feeling or less—and begin learning by trying out the other’s ways.

Women, men often think of you as whiners or motor-mouths— can’t cope with the slightest little problem without talk, talk, talk. They think you just want pity and keep complaining about the same things over and over. They want to see you take action more often. They feel helpless when you talk about how you feel rather than seeming to find solutions and moving on. They don’t understand how important their listening is as support as if he’s saying, “I love you and care that things aren’t going well.”

Men, women often believe that you’re big-time phonies— filled with terror at facing realities while acting as if you are brave enough for anything—lions, tigers, all sort of threats. They really don’t usually want you to fight tigers, etc., they only want you to look inside yourself a little and to be honest with what you find. They think that voicing your doubts and concerns is very worthwhile, that getting it off your chest is a beneficial end even if you do nothing to correct the situation. And they believe it also improves a relationship to hear about what is going on inside of you.

Get with it, guys and gals. LEARN FROM EACH OTHER, COOPERATE. Each of you have something to offer the other. So start bending a little! Everyone will be happier.

Women, test out your ability to accept some emotional discomfort without thinking that “what comes up must come out.” There are often better ways to connect with men than through problems. Try thinking through a solution to a problem and present the thought-through conclusion to your man (without an emotional tone that makes it hard for him to listen). That emotional tone overwhelms many men. Staying cool and calm-acting is a virtue to most men. Are you a feminist or what? You can’t have it both ways. With the privileges of respect consideration and opportunities comes the responsibility to not “lose it” regularly over life’s difficulties. Sometimes there is a place for letting others know your feelings and sometimes there is a place for keeping it to yourself and moving to resolve the issue without such expressing. You can sometimes do it! And the strength you gain is incredibly gratifying.

Men, experiment with paying attention to and talking about a self-doubt, or something that hurts your feelings, or a fear you have, or a sadness you can’t seem to ignore. In other words, allow yourself to become a little more open. Recognize that it’s okay to not have it together all the time. As a matter of fact, it is far more than okay. It is currently believed that holding everything inside contributes to ill-health—heart, gastrointestinal disorders, even cancer. Conversely, talking about feelings and problems can help prevent or diminish the symptoms of many illnesses. It can even, on the spot, feel as if a weight has been lifted off you, a weight you may not have even known had burdened you. The lightness you may experience can re-energize you and help you to limit explosive anger. Remember, women don’t feel guilty and responsible the way you would listening to how things are going poorly for you.

Women, if your man expresses feelings resist the urge to act superior with comments like, “Now, doesn’t that feel better.” Or, don’t say, “I told you so” if he says, “I feel better having talked about that.” And, please don’t “interpret” him. It is insulting, counter-productive and the only purpose it could serve would be to boost your ego. It creates competitiveness rather than cooperation which is inappropriate and ugly in a relationship.

Men, please stop yourself from saying, “See, you don’t have to talk about every little thing.” That is belittling and will discourage her from experimentation further in this way.

You don’t have an edge on “rightness” You are both right and you are both wrong! The goal is a better relationship and personal; growth. Of course, we don’t all fit the stereotype of our maleness or femaleness. The above does not necessarily describe you. But, if you have read this far the topic of this entry has most likely been of interest to you for some reason other than mere curiosity. Could you or someone in your family benefit from the above?